Chocolate – A health gift from the Gods? 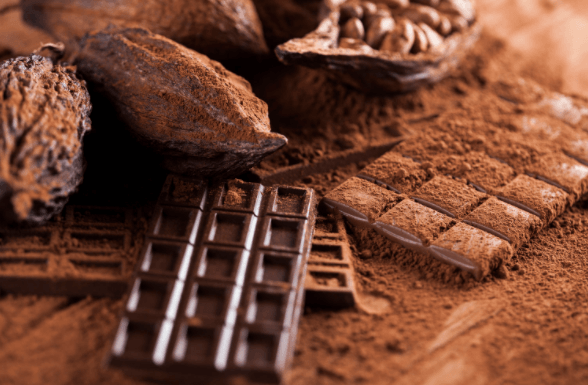 Theobroma cacoa is the name of the plant that provides raw cocoa, the main ingredient in chocolate.  This plant has a long history of supposedly being a cure for almost everything from fatigue, indigestion, emaciation and hemorrhoids to respiratory ailments, cancer, depression and heart problems, in fact, the Aztecs believed the plant to have divine origins.

What is in Cocoa that makes it so powerful?

First, it’s jam-packed with antioxidant rich phytonutrients.  The antioxidant potential of a food is measured by its “ORAC” value.  ORAC is an acronym for Oxygen Radical Absorption Capacity.  In theory, the higher the ORAC value, the higher the concentration of antioxidants in the food.   Organic raw cocoa has the highest ORAC value of any food!  Look at these comparisons from the US Department of Agriculture data on high ORAC value foods per 100 grams.

In addition the minerals copper and magnesium, which many people are deficient in, are both found in good amounts in cocoa.  Copper has many uses in the body, including the oxygenation of the red blood cells and aiding in cellular energy production.  Magnesium is required by over 300 enzymes in the body and is crucial for cardiovascular health, optimal blood pressure and protein synthesis.

The food of lovers

Chocolate has a reputation for making people euphoric and happy which is why it’s often given as a gift of love.  Cocoa is a fantastic source of scientifically proven "bliss chemicals" known to influence the body and brain in beneficial ways, these include:

1. Serotonin: A neurotransmitter known as the "feel-good” hormone which combats stress and improves mood. Cocoa not only supplies the body with serotonin, but also aids the body in producing its own serotonin naturally.

2. Phenylethylamine (PEA): better known as "the love chemical," for its association with the giddy excitement one feels when falling in love. When ingested, PEA stimulates the central nervous system to release the body's natural opium-like compounds called endorphins. PEA signals the body to promote the sensation of alertness, focus, and mental acuity, all while elevating mood, speeding up metabolism, and boosting memory.

3. Anandamide: in Sanskrit, ananda literally means "bliss," making anandamide the "bliss chemical" in chocolate. Anandamide is a neurotransmitter found naturally in cocoa and also in the human brain (the only two places it is has currently been discovered). Anandamide binds to the same receptors sites in the brain as THC from cannabis but unlike THC, anandamide won't leave you in a mind-altered state, but, does produce a feeling of euphoria.

4. Theobromine: this chemical acts as a vasodilator, meaning it relaxes smooth muscle. Benefits of this chemical include enhanced blood flow and oxygenation to the brain in addition to long-term antioxidant properties.

5. Tyramine: this helps balance mood and reduce anxiety but can also trigger migraines in sensitive people.

Why do women crave chocolate at certain times of the month?

Why does it seem like women crave chocolate more than men, especially a few days before their period starts? Well, we know that lower levels of the brain chemical serotonin occur at this stage of the cycle, so craving carbohydrate-dense foods like chocolate makes sense (since eating high carb foods can trigger serotonin production).   Incorporating other endorphin stimulants into life – such as exercise, music, meditation, massage, humour, social ties, job satisfaction, volunteering, etc. — might go some way to help control chocolate cravings.

The following are a number of notable research studies of the health benefits of cocoa.

The flavonoids in cocoa raise HDL, the “good” cholesterol and both lower and protect LDL “bad” cholesterol from being oxidised (damaged by free radicals) in the blood which helps prevent plaque formation (Baba et al. American Journal of Clinical Nutrition)

Research is also indicating that cocoa powder upregulates specific immune cells and helps modulate immune function.  It also appears to increase brain oxygenation which has beneficial implications for diseases like dementia.  And with its high fibre content it has been shown to facilitate the excretion and detoxification of environmental contaminants from the body.

With all cocoas health benefits is it a superfood?

Most research is conducted on raw cocoa powder and not on chocolate.  So hold on a second before you rip open that Snickers bar: We’re talking about cocoa here, not milk chocolate. The difference is monumental.

This means that you’re getting very little real cocoa per bite!  Milk chocolate is standard junk food. It’s neither nutritious or healthy.

Here’s a comparison of four types of chocolate:

As the sugar and milk portion increases in chocolate, the health benefits decrease.

One thing to also be aware of is the high levels of lead found in some processed chocolate products.  Cocoa beans themselves contain very little lead so it appears that the manufacturing process is the culprit here. Sticking to raw, organic cocoa whenever possible is the answer.

Truly, a gift from the Gods?

So it seems that cocoa plays a strong role in protecting us from degenerative diseases as well as making us feel good with its mood enhancing properties.  Modern research is beginning to prove what the ancients long celebrated: raw organic cocoa is a gift from the gods.

Supermarkets are now stocking raw, organic cocoa so it’s easy to make it part of your daily routine.  Just add one heaped tablespoon of raw organic cocoa to hot water or stir in a little nut milk (or milk of choice) and heat up.  You can optionally add cayenne pepper, cinnamon or a little sweetener (preferably xylitol, erythritol or stevia) as you wish.